×
Go to content
Traditional Chinese Medicine is a system of medical health care that is over 5000 years old and is based on the Chinese concept of harmony and balance and is the second largest form of medicine in the world.
TCM takes a deep understanding of the patterns and laws of the natural world around us and applies them to the human body, working with the body’s Qi (vital energy) and acupoints found on the meridian channels.
Traditional Chinese Medicine says that disease and ill health are the result of poor Qi circulation in the body, whilst good health is the result of smooth Qi flow.

The main focus of Tai Chi Qigong, Medical Qigong and TCM -Traditional Chinese Medicine is to ensure the smooth flow of Qi around the body through the meridian channels (Jingluo), which are a network of invisible ‘rivers’, nourishing and energizing the body. Acupoints, which are points found along the meridian channels, allow us to gain access to this energy in order to rebalance ourselves. 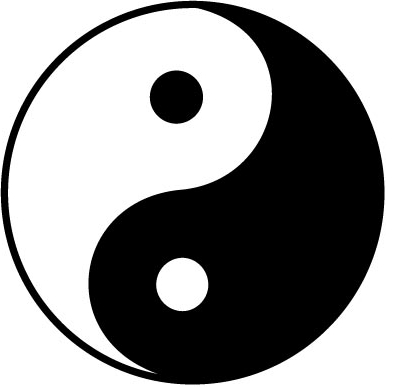 Yin Yang - The 'TaiJi' symbol ('Supreme Ultimate')
Yin Yang is the most important to concept in Traditional Chinese Medicine & Tai Chi Qigong.
By focusing on the Yin Yang in each Tai Chi Qigong movement and within our bodies, it brings us, our awareness, our bodies into harmony, with the natural world so we become less disconnected and isolated, bringing us good health both mentally and physically.
The Chinese symbol of Yin Yang relate to the dark and sunny side of a hill; opposite but complementary qualities, each changing in to the other but forming a whole. The seed of Yin present in Yang and vice versa. Yin becomes Yang as night becomes day, the breath, seasons, waves, sun/moon, day/night. Yang is usually associated with energetic qualities such as air (Dragon). Yin is associated with the physical form of an object, for example earth (Tiger).
Midnight is maximum Yin, midday is maximum Yang. In the seasons Spring is Yin within Yang, Summer is maximum Yang, Autumn is Yang within Yin and Winter is maximum Yin.
Four Aspects of the Yin Yang Relationship
1. They oppose each other
2. They are dependant on each other
3. They consume each other
4. They transform into each other
TCM - One of the most important applications of the Yin Yang principle is seen in opposing symptoms. Yin Yang can be seen in the functioning of the body. Yin Yang are not fixed qualities - they are purely relative and constantly changing to maintain healthy balance within the well person. The body is in a constant state of flux, always seeking balance or homoeostasis between Yin Yang, constantly adjusting and balancing. Without this constant adjustment, deficiencies (Yin) and excesses (Yang) would cause imbalances, resulting in illness and disease.
The Five Elements Theory
The Five Elements are: Wood - Fire - Earth - Metal - Water
The Five Element theory is based on the natural cycles and interrelationships that exist in the natural world around us and within ourselves. The elements are represented within each of us, as aspects of our organs (Yin and Yang), emotions, functional systems of the body and energetic system of the body, the meridian channels, a colour and a season. Each Element represents an energy.

Our bodies intrinsically contain the Five Elements, not just conceptually; these elements are an inseparable part of our flesh and blood, all the way down to our DNA. To maintain balance and health, each of the Five Elements should be balanced within us, bringing balance and harmony to our mind, body and spirit.
Relationships between the Five Elements:
The creative, or generating, cycle of the five elements is:
Wood creates Fire, Fire creates Earth, Earth creates Metal, Metal creates Water, condensation and Water creates Wood
The controlling, or destructive, cycle of the five elements is:
Wood uproots Earth, Earth controls Water, Water extinguishes Fire, Fire liquefies Metal and Metal cuts Wood 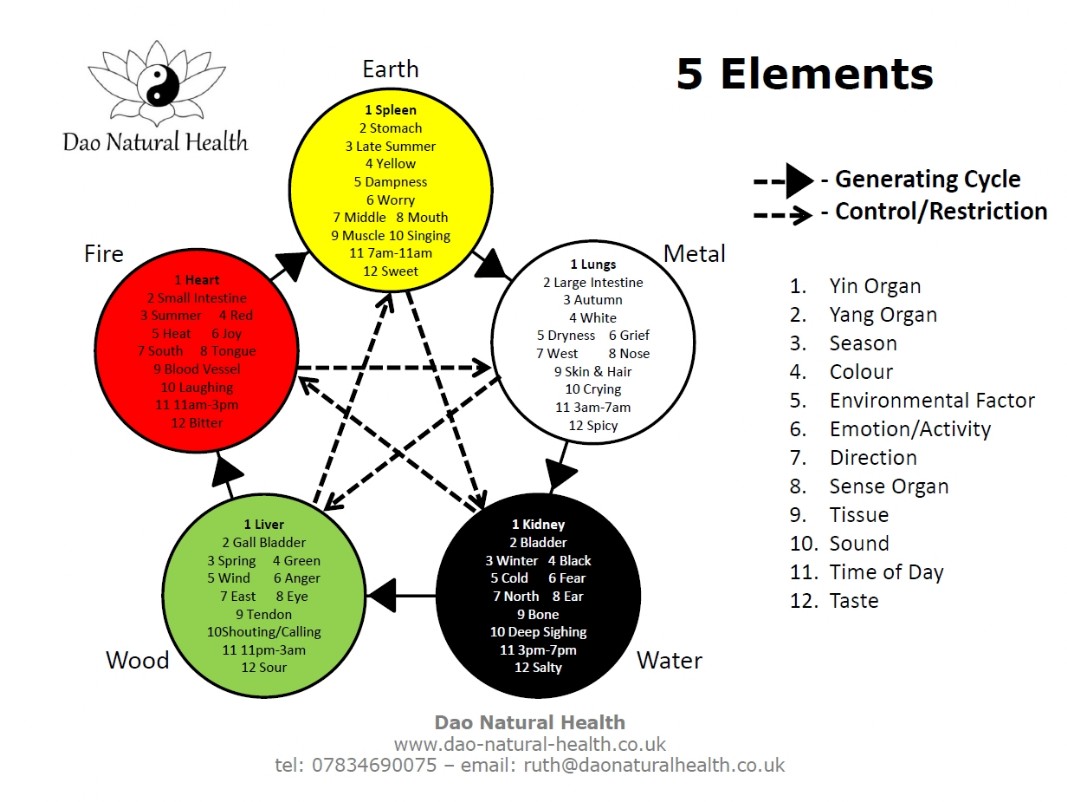 The Five Elements and correspondances

It is important to remember when considering all of the many, many theories and principles of Traditional Chinese Medicine and Tai Chi Qigong that, for me, it all boils down to this;
The aim is to deepen and relax the breath so the mind and body will follow. If the breath is relaxed and flowing, our Qi (vital energy) and blood will flow, allowing us to be balanced and healthy, allowing us to quieten 'the noise' of everyday life and see the beauty all around us in this one moment. That, to me, is good health.